After returning from Hueco Guide training (psyched!) I was amped to hit the alpine last week.We attempted to climb at Endo Valley twice but it feels as though the season there is over for me unless a cold spell rolls in...  (Click on images to enlarge) 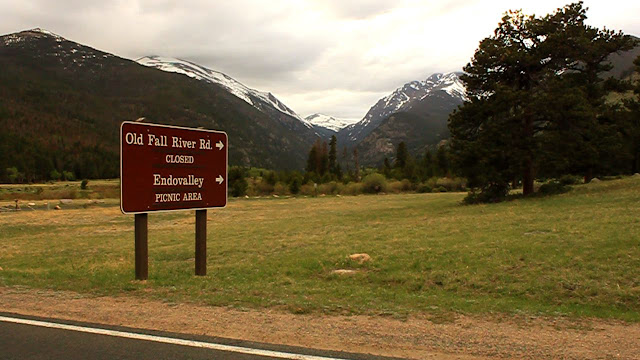 The true locals don't seem to mind we are bouldering in Endo! 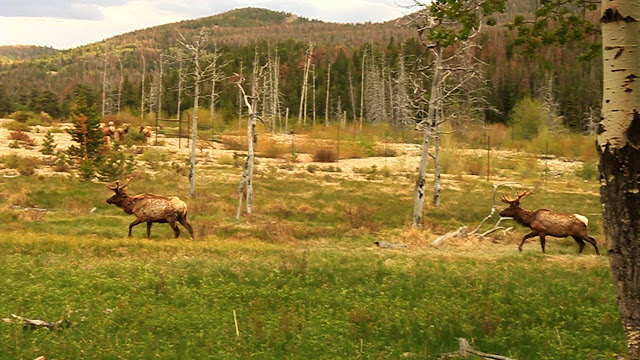 Emily (who loves the warmer temps) fired Extra Alienated_V9 her first of this grade! 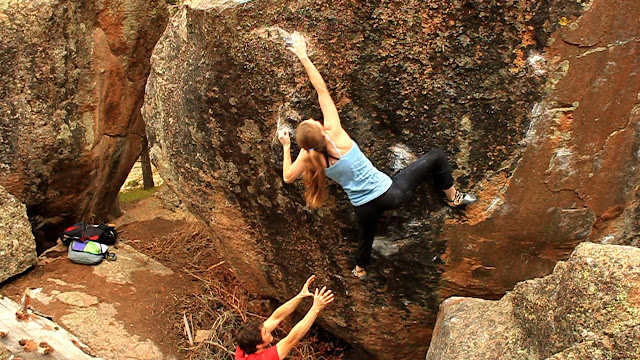 I did repeat MS 13 Training Arete_V8 three times for fun.  It is one of my favorite lines up there. Bear Cam and I had spotted it a few months earlier but snow had impeded our FA attempts - I am psyched Chad Greedy scored the FA.  It is a classic. 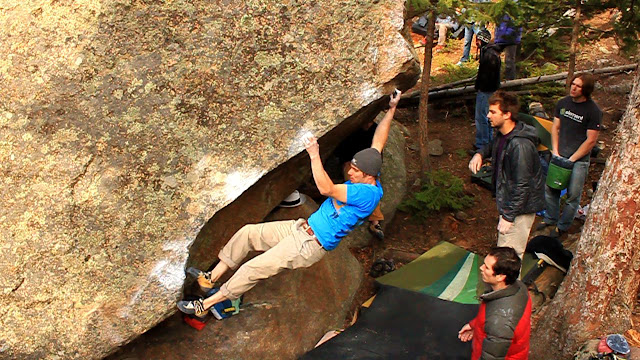 I also scrubbed a new crimp line left of Revanche_V5 on the West ridge above the road and the main boulders.  I called the new line One Above One_V6 as it climbs hand over hand up a crimp seam to a big move to jugs with an airy but fun mantel.  I also added a sit to Tim Daniel's Owlet_V5. This mini rig climbs the left bulging corner on the Extra Alienated boulder.
I'll be posting an Endo video I put together which includes Jon Cardwell's 3rd ascent of Flux For Life_V13.  Below are a few picts of Jamie Emerson coming close to sending Flux For Life which he considers a "hand shake" climb.  Climb it and you'll get a hand shake, cause it's proud and burly. 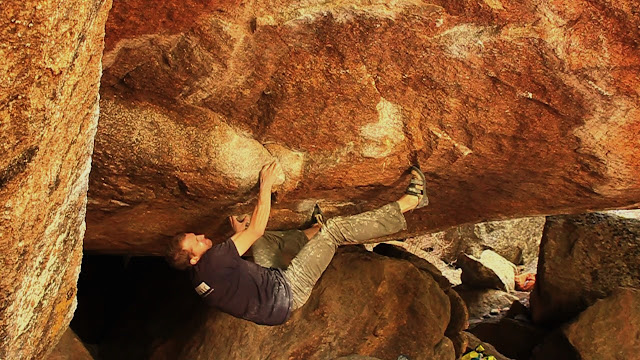 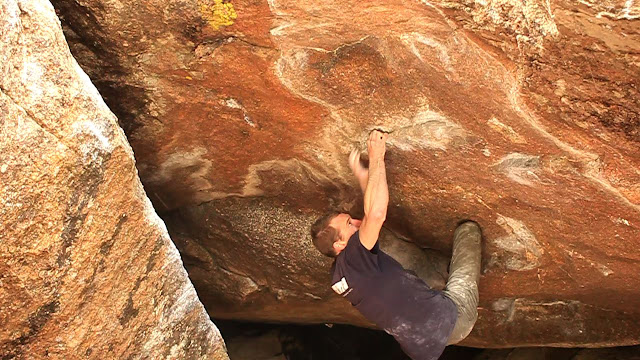 The iconic Ben Scott showing off his Merkin_V9... 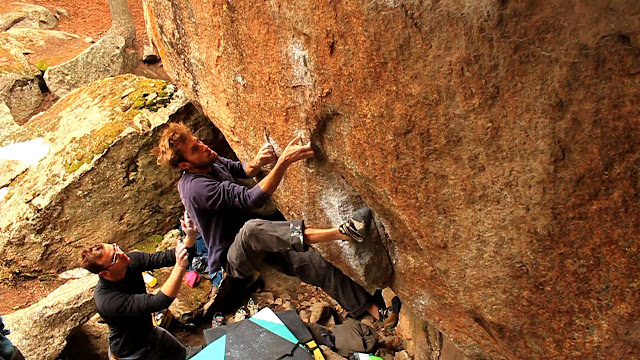 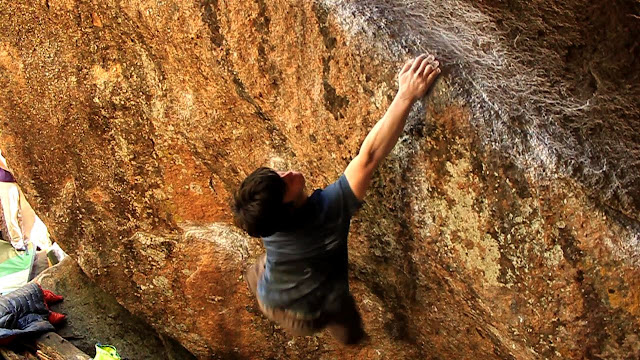 We also checked out Jamie Emerson's and Jon Cardwell's slide show at Bent Gate in Golden then Sam Davis' slide show at Ed's Cantina in Estes later in the week.  It's always good too see accomplished and experienced climbers showing off their own media and creativity... very inspiring!
Today we hit up WOLVO for the first session of the season and it was perfect.  Perfect temps, perfect crew, and perfect projects. 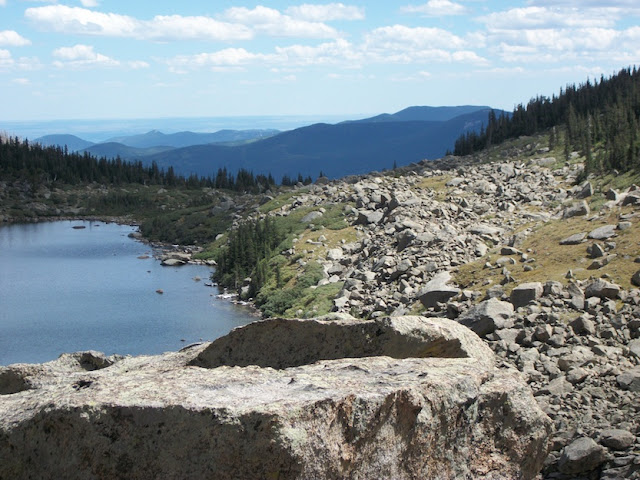 Emily came close on Chalk On Rock_V8 and Kryptonite_V7/8.  She was tired so no sends but solid progress.  Kryptonite's last crux crimp is significantly larger than last season when it was first established.  Aggressive brushing or just the nature of the crumbly granite in the seam sloughing out of the hold due to traffic has increased it's size and in my opinion decreased it's difficulty.
I wasn't able to walk past Chalk On Rock this season and fired it second go.  It is a fun line and I'm adding it to my list of warm-ups. 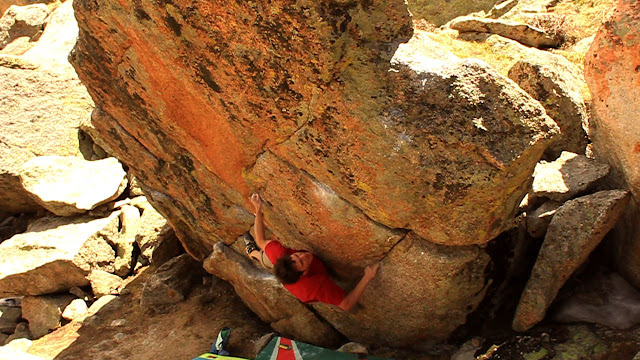 I had my first session on Phobos_V10/11 and really enjoyed the unique style of climbing.  I was able to do the crux first try but this being our first time at altitude for the season my linkage was limited to two overlapping sections.  I sent it during my next sesion with Herm there for mental support! 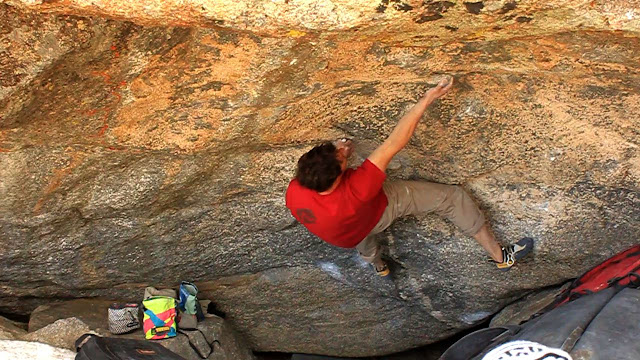 There is so much to do up there - I don't where to start...  Please stay tuned for more photos and video!
Posted by PDrizzle

What do you call the sit to Tim Daniel's Owlet V5 up at endo?