After scoping a beautiful green lichen wall in the talus field above Gandalf and falling past the crux on my flash attempt of Nic Oklobzija / Brian Camp's new Shapes and Sizes (Low Right ) V9 over the weekend, I sprinted up the Poudre for a quick after work session yesterday and fired an old Ben Scott line that hadn't seen traffic in awhile and dubbed it (with Ben's permission) Rapist Wit, V3 - a 20 foot high boulder with a bit of a scary landing.  I also nabbed a quick ascent (1st try) on Shapes and Sizes (Low Right).  Thanks to the efforts of Beau Kahler and his Arkansas crew the landing below Rapist Wit is much less intimidating and 4 or 5 pads feels more than safe...
We also scored footage of Collin Horvat firing another 2004 Ben Scott line we dubbed (with Ben's permission) The Soft Parade, V9 more picturesque and roadside than classic but good times nonetheless.  The Soft Parade is located on the right 400 yards before the Gandalf area parking ON PRIVATE PROPERTY - CLIMB AT YOUR OWN RISK.
Rapist Wit is located just above BC's Tractor Beam, V7 and a few boulders left of Shapes and Sizes.
"Tell her I'm rich and I have a Rapist Wit, I'll just hang here and put out the vibe..."
-Lloyd 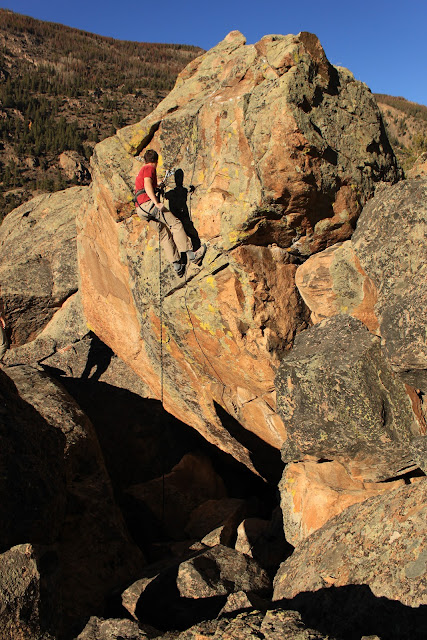 Cleaning the rig...
Sending the rig.
3 New Rigs in The Poudre from Paul Dusatko on Vimeo.
Posted by PDrizzle

thanks for repeating my boulder problems. I'm glad you guys were psyched and had fun. The boulder colin is on is also on private property FYI.